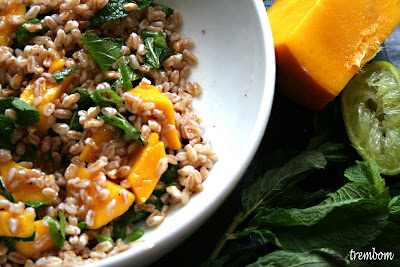 I loved the idea of this event held my Meeta, Spring is in the air. I LOVE spring, I love spring food, spring air, spring acitivities. It is a period of great hope, where one starts over again. We had a long winter in the UK and I was counting the minutes for the change. 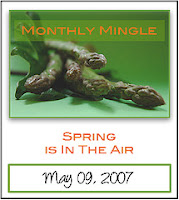 I love having loads of salad at this time of the year. Fresh herbs. Fruit.Berries, berries, berries. I have prepared this delicious salad which I think is very suitable for Meeta's event: a mango, mint and faro salad.The original recipe asked for bulgur wheat but I only had farro at home. If you don't know what farro is, in a nut shell it is a grain very much used in Italy.They say that the Roman legions used to feed on it. This is what About, the website says:
Grano Farro has a long and glorious history: it is the original grain from which all others derive, and fed the Mediterranean and Near Eastern populations for thousands of years; somewhat more recently it was the standard ration of the Roman Legions that expanded throughout the Western World. Ground into a paste and cooked, it was also the primary ingredient in plus, the polenta eaten for centuries by the Roman poor. Important as it was, however, it was difficult to work and produced low yields. In the centuries following the fall of the Empire, higher-yielding grains were developed and farro's cultivation dwindled: By the turn of the century in Italy there were a few hundreds of acres of fields scattered over the regions of Lazio, Umbria, the Marches and Tuscany.

The salad is great to be served with some nice chicken grilled on the barbie. A light meal. And truly scrumptious.

Prepare the faro / bulgur wheat according to the instructions on the package. Place the mango slices on a salad dish,followed by the mint leaves and the spring onions. Add the faro/bulgur wheat and mix it all.
In a separate bowl pour the olive oil, lemon juice and mix well. Then add the salt and pepper and pour it over the salad. Mix it all an serve with grilled chicken breast. It is absolutely delicious! 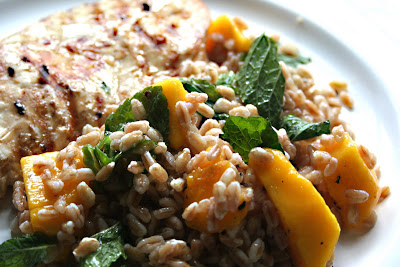 Valentina, this looks absolutely delicious!! With ingredients I love, it can only be good! Great idea for the summer, can't wait to try!
Ana

I love Bulghar Wheat - a perfect entry for Meetas competition!

Such a colorful dish, Tina! I've never had farro, but if you say it's good I'm in - your salads always impress me. The ingredients you put together and the way you present them. Wonderful!

What an interesting combo!

Hi there,
Lovely pics and nice combo.Altogether make a perfect dish for this spring.

Valentina this is such a gorgeous combination! I love it and must try out! thanks for joining us!

i've never tried farro...but i love bulgur wheat.Also mango with bulgur wheat is an unusual combination.Will have to try this one out.

This IS the perfect spring meal, Valentina! I love the colors and the mangos look marvelous.

Oh Valentina, this sounds like a perfect light and delicious accompaniment to a spring or summer dinner! Beautiful!

All this goes together so well, I can see in your photos. And how could it not be fabulous to eat with the mango and spinach! Totally perfect.

Ana, knowing you as I do this salad will definetely please your taste buds.

Freya, if you have a chance give farro a try as well.

Pille, I was surprised with the outcome.

Paz, I belong to the mango club like you.

Meeta, I did think that it was a perfect match for your competition.

Kate, let me know if you do try. would like to know what you think of it.

Kelly, and it is indeed.

Tanna, what a great idea. I can see another salad coming up.