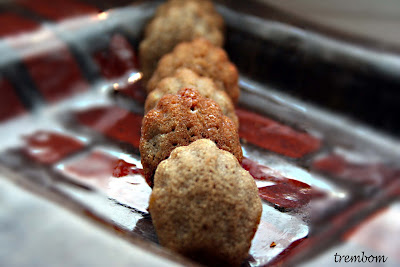 I was in recently and on the way back I grabbed a magazine which had an article with a Breton chef called Olivier Bellin. He has received an award as a sort of ‘young revelation’. He has made buckwheat flour as the centre of his cuisine. Buckwheat flour, blé noir, was until the 19th century, one of the staple foods of and . They used to make buckwheat porridge in – the flour would be soaked either in curdled skimmed milk or in plain water and then stirred in a pan over the heat. There was an article in April ‘Saveur’about Brittany crêpes, which are made with buckwheat. Olivier uses buckwheat flour not only in his crêpes, but in things such as madeleines and crème brulées.

I am fascinated by people who take ingredients to a different level. Local ingredients, most importantly. I feel that people tend to look elsewhere for the greener grass, the more interesting view. And many times there is equal beauty and value in our backyard. 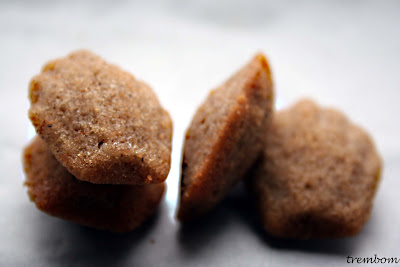 As I had never, ever cooked/baked with buckwheat flour I decided to buy a bag and give it a go. Amongst many things, it is gluten free. I elected Olivier’s ‘madeleines au blé noir’. I have already made madeleines before – with rosewater and also with orange rind, but never with buckwheat. I was dead curious to give this recipe a go. The recipe has to be prepared at least 12 hours before baking (don’t try to rest it for less than 12 hours). Oh, and it is well worth the wait. I loved the madeleines. They have a sun tanned look about them and a sort of nutty flavour because of the browned butter. They taste rather special. And very, very good. I took half the recipe to work and they went just like that. I also gave another 1/3 of the recipe to a French friend who is not too keen on madeleines in general, and she just loved these. She said that she will be in the look out for buckwheat madeleines from now on. 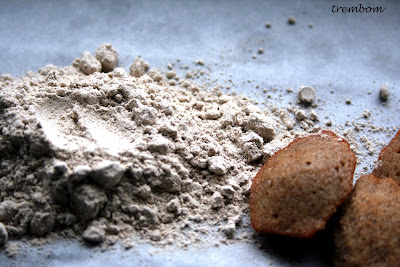 Melt the butter until it turns into ‘browned butter’. Transfer it to a bowl and mix it with the honey. Let it cool. In the meantime put the flour – almond and buckwheat, together with the sugar in a big mixing bowl. Mix the egg whites lightly with a fork, until they just begin to froth. 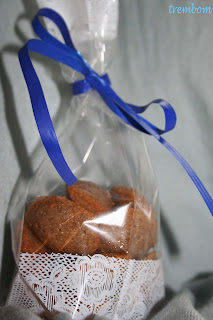 Transfer the egg whites to the bowl with the dry ingredients and mix them using either a fouet or a wooden spoon. Once the butter is cool add it to the batter as well and mix it a bit more. Cover the mixture and put it in the fridge for 12 hours at least. No less than that. It works well if you leave the batter to rest overnight and bake the madeleines for breakfast.

Pre-heat the oven – 180oC/160oC fan assisted ovens. Prepare the Madeleine moulds – I used small ones and it yielded 80 madeleines. I baked them in two days. No, not because it takes ages, but because I took 40 to work and the following day I baked the other 40 as a gift to a friend. As you have noticed there is no leavening agent in the batter. It will raise as a result of the cold batter being placed in a hot oven. Only take the batter from the fridge once the oven temperature is right. Keep it in the fridge in between one load and the other. For small madeleines it took only 8 minutes to have them ready.

Posted by Valentina at 3:58 PM

How interesting! It's nice to know that you can use buckwheat flour for other than blinis. Definitely worth trying - your madeleines look lovely, and I haven't made any since I made the orange oil madeleines last month..

Pille, I am planning on looking up some more recipes. I think that I missed your orange oil madeleines post. Will do a seach in your blog.

Very, very interesting! I've never had anything with buckwheat flour before. These Madelines are a good start. ;-)

I hope the June issue of Saveur is at the airport on Monday when I'm there so I can find this article you talking about here.
I loved the crepes in the may issue.
I love these madeleines! A really beautiful color, I am so impressed. I'm always looking for ways to use different grains and this is really amazing!

oh just lovely. Funny as I myself made some with chestnut flour! Very nutty too!

Tina, these are just fabulous!
I was so curious about them after you told you were gonna make this recipe. The results are wonderful.

And I'd be smiling from ear to ear after receiving a beautiful package like that.

Thank you for sharing the recipe. The Madeleines sound delicious. Since I have to maintain a gluten free diet, these are perfect for me.

Thanks for this lovely post and recipe--I have been looking for a gluten-free madeleine recipe and this looks like IT!