This week's Weekend Herb Blogging event is being hosted by Haalo from Cook (almost) Anything At Least Once.
Next week I will be hosting it and I am so excited. I really like this event. It has been literally the soul of the English version of my blog. It was a long time ago that I told Kalyn, the event creator, that I would love to host it one day. 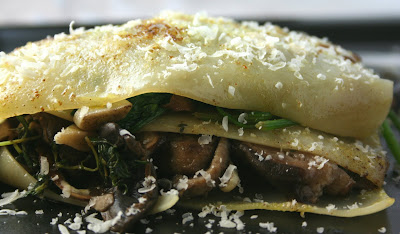 This week I will make it by the skin of my teeth. I have had a really busy weekend and just had time to stop and prepare something an hour ago to be exact. I have been thinking about this open lasagne since Tuesday. I wanted to have a light lasagne and also a very seasonal one. So I chose mushrooms.

This is what I read about mushrooms which I did not know: The Pharaohs thought they were food from heaven; the Romans spread them throughout their Empire and from the Middle Ages to the Renaissance they were an autumn feast.

I love them because they taste delicious and also because I know that they are a good source of minerals - specially potassium, a good source of vitamins - specially vitamin B, low in fat and have no cholesterol, low in calories, its protein is superior to that of many other vegetables, and they are in season.

I watched this show on BBC2, What to eat Now, and found out that I could watch the first episode on the website. It is all about seasonal food. This is where my inspiration came from.The first show followed Valentine Warner, the new cook on the block – he says that he is not a chef, walking in the woods with a mate collecting mushrooms and truffles. They gathered quite a few mushrooms but no truffles. And they ended up preparing some scrambled egg with truffles that Valentine’s friend had in his pocket. Valentine prepared this lovely oven baked lasagne as well when he got home. I decided that I wanted mine to be an open lasagne. I just thought that it would be much lighter and I wanted to try my idea.

I had no special recipe - just what i saw on the show. I had a bunch of different types of mushrooms which I sliced and cooked in a very hot pan with a bit of butter, finely chopped garlic and thyme. Towards the end I seasoned it with salt. You could add black pepper if you like. I then set the mushrooms aside, boiled water for the pasta and proceeded to prepare the spinach. In the same pan where I had prepared the mushrooms I threw a big bunch of spinach with more chopped garlic and let it wilt. I then seasoned it with freshly ground nutmeg and a wee bit of salt. I transferred the spinach mixture to a colander and let the excess water from the spinach drain. I cooked the lasagne sheets and then once cooked I heated a non stick frying pan and threw a tiny piece of butter in and a bit of ras el hanout, that beautiful Moroccan style spice which has amongst other things rose petals. I just fried it a bit in the oil and then just threw the lasagne sheets in, one by one, so that they got a bit of the ras el hanout on them.

Posted by Valentina at 1:14 PM

I really like the sound of this special lasagne. I really admire that despite your busy schedule, you're always able to whip up something interesting and delicious. I'd like to try making this.

good morning valentina!!
mmmmm...I love all kinds of lasagnes!!
must try yours!
thanks for hosting the whb...I'll try to think of something to post. :)

have a nice week, see you soon
bacioniiii

That's a lovely way to a lighter lasagne! And don't you think lasagne is really about what is available not not something fancy that you have to go shopping in four stores looking for. Love mushrooms.

mushrooms come very standardised where i live. they are not as exciting as in other european countries where mushrooms are part of culinary tradition

I like the way you just threw this together. It works!

Sounds delicious. Anything that has mushrooms will be good to me, I absolutely love them.

Hi Paz, it is not easy. I used to have a not so demading role but over a year ago it all changed and it is hard. blogging about food makes me so happy though, so i keep trying . Kalyn's event has been a great incentive for me.And people like you who are so supportive.

Brii, this dish is quite versatile and you can play with the fillings, with how you dress your pasta as well.I will be looking forward to receiving your post for WHB event.

Tana, i so agree with you. it is a more versatile dish than many people might belive.Oh, give me mushrooms any day and I am a happy woman.

Maria, if i could send you some fresh ones i would. But then i guess in Greece you have so many other wonderful ingredients that are not so easy for us to find fresh. I see the great things in your blog.

Annie, in a way it even surprised me immensely. I have been visiting your blog and love it. You are such great writer.

Kalyn, we are definitelly part of the same tribe. Mushrooms are so rich in flavour and cooking possibilities. I would love to have the opportunity to go hunting for mushrooms in the wild with someone who knew what they were doing.