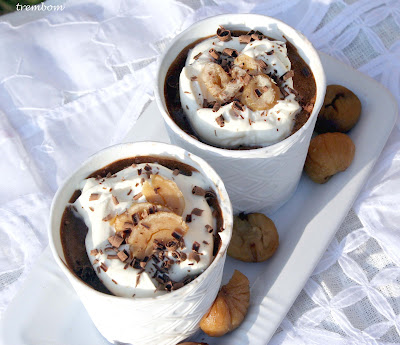 I have been looking for a mousse recipe for this event for a while now. I wanted to find one that was truly special. After visiting Helene’s blog – Tartellete, over and over again, I keep seeing these wonderful posts she makes. She pushed the bar way up there.

I knew that I need something that was not common. The other week I made a recipe I had been thinking about using for the event: chocolate with chilli mousse. That turned out to be a bit of a saga: first I wanted to find an egg substitute for the recipe and read a bit about it. In the end I decided to give vinegar a try as replacement because I had read somewhere that it would do the job. Well, what it didn’t specify, and me being so eager didn’t use my head, was that it was probably good but not for stuff like mousse. When I tried the mousse I could tell straight away that there was something wrong with it. The texture didn’t look right, and the taste...well, it was as if the ingredients had not really gelled together. I was terribly disappointed. I ended up making the recipe again, this time to the letter. I then decided to serve it to my guests without telling them about the chilli ingredient first. I wanted to see if they would notice it. The chilli was noticeable without being overpowering. My guests liked it – they even said that had they known about the chilli they wouldn’t have tried it, but they were glad they hadn’t been told in advance. That was a very successful try in the end.

However, I was still looking for THE recipe, and I read books, magazines, marked pages…However, today I decided that I would have to pick one and stop with all the fuss. After all I might have ended up missing the event all together.

I ended up choosing a chocolate and chestnut mousse by Mary Cadogan, an amazing British food editor who is spending some time in at the moment and keep posting these great recipes and a lovely diary.

The recipe asks for chestnut purée so I dashed to my local supermarket to get some. I had to prepare the recipe before changing my mind again. I also decided to buy some cooked chestnuts as well as I cannot find them al natural at this time of the year – it would be nice to have some sliced on top of the mousse. At in the end I was glad that I decided to do that as it looked quite pretty – click on the picture to enlarge it.

I was just not so impressed with the final result though. Don’t take me wrong, it was rather lovely, but in a way it just tasted like any other chocolate mousse. I kept trying to find the chestnut flavour in it and I honestly did not. I think that the role of the purée might have been to play with the texture – I did find creamy in a special way.

That’s what you need for the mousse:

1. First of all take 25g of the dark chocolate and use a vegetable peeler to make chocolate curls. Set the curls aside until you need them.

2. Break up the remaining chocolate, then put it in a large bowl over a pan of simmering water until melted (you know the drill – don’t let the bowl touch the water). Remove from the hit then stir in the chestnut purée until smooth. Stir in the egg yolks and brandy. It might look as if it will not all blend together, but it will. Have faith.

3. Whisk the egg whites in a large, clean bowl until stiff, stir a quarter into the chocolate mix to soften it, and then fold in the remainder until well mixed. Divide the mixture between your bowls/cups... whatever you might want to use for your mousse. Put it in the fridge for at least 2 hours.

4. When it take them out of the fridge to serve up, quickly whip the cream and spoon it over the mousse. I then added slices of the cooked chestnut and to finish it off I sprinkled it all with the chocolate curls.

Beautiful! No, gorgeous! Absolutely great picture. Sorry the taste was not up to your expectations, it sometimes happen when we put so much of ourselves into an event. I am glad you participated!

Yes that is an absolutely incredible photo and the enlargement is WOW! It's looks so good it's really hard to believe that taste didn't knock your socks off too.

You definitely found an awesome recipe, this looks amazing!

Tina, this is lovely, but no surprise here, everything you cook is wonderful.

I keep wondering how chocolate and chestnut pair. It looks delicious, I have to say, especially with the cream on top, I love its velvety texture.

Hi Valentina! This mousse looks gorgeous - I love the idea of combining chocolate and chestnuts... I'm sorry it wasn't quite what you were expecting.

Gorgeous photo and interesting combination. Anything with that much whipped cream has to taste pretty good, even if not exactly what you expected. Well done.

Oh my! Those look like little clouds of chocolate and chestnuts. I'd like to eat one right now. :)

Awww am sorry your mousse didn't turn out like you wanted.. but if it helps any, they look absolutely gorgeous!

Bummer that it just tasted like chocolate mousse...the chesnut would have been a lovely flavor.

You know, i have been thinking about your dilema with the mousse. I have to say thatchestnut puree does not add a whole lot of flavor, just a woodsy depth to the end product. I was disappointed the first time I cooked a dessert with it, but now i expect the underlying flavor, as opposed to a "big bang" kind of revelation...I probably don't make much sense...I am stopping then!

Helene, I think that I wasn't really sure about the outcome in terms of the role that the chestnut would play. That's why I got so disappointed. And also in addition to your last comment, you made perfect sense. ; o )

Tanna, I had one cup left in the fridge and I had in the next day. I found the overall flavour and texture more enhanced. I certainly enjoyed eatin it then more than in the day I prepared it.

brillyn, I just expected to be blown away when I had it and it didn't happen - well, not quite like that anyway.; o )

Pat, as I already know what you want to post..I am sure that you have nothing to worry about. You made a great choice.

Gilly, thank you . It looked like a great combination at first. ; o (

Elle, the chocolate and nuts on the whipped cream made the first mouthfulls most enjoyable.

Lis, thank you. I guess I have to take something positive out of this recipe.; o )

Peabody, That was exaclty what I thought when I saw the recipe: chesnut flavour!! Yum..

It looks wonderful even if it didn't come out quite the way you had planned...the chestnuts on top really make them tempting, that much I can definitely say! :)

Ooooh, the chestnut would have been really nice. The presentation is gorgeous!

I don't much like chestnut puree. But I so like the idea of a little chili in my chocolate mousse. Thanks for joining HHDD.

Joey,I have to agree with the topping. I am so glad I had the idea of adding them as it would add a lovely texture to the first spoonfull.

Barbara, sometimes I still wonder whether I shouldn't have really posted that recipe instead. ; o )

This is an ingenious combination. I can only imagine how luscious it must have tasted. The chestnut puree you use is it pure chestnuts? I have a packet of chestnuts and was wondering if I would get the same effect if I pureed them.

My favorite flavor: chestnut! I made chestnut cremes which where absolutely delicious and I definitely want to try your mousse! Gorgeous pictures.

I'm sorry your recipe didn't meet your expectations -- it's a great combination and it's beautiful!

The combination sounds so wonderful - perhaps you will try it again and tweak it to your liking? They look so lovely!