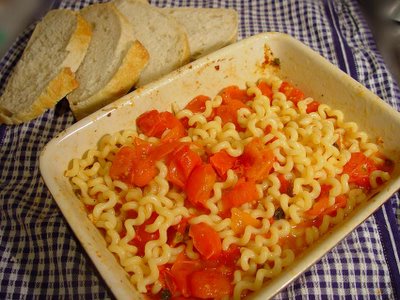 This is a great, low profile recipe that I have done over and over again. The original recipe asks for capers and mozzarella which I do not always use. Capers are sometimes left out because some people cannot stand them so I always decide on whether adding them or not according to the guest(s). As for the mozzarella, I do not always have it in the fridge plus I am not often in the mood to drive all the way down to my local supermarket if all I have on my shopping list is cheese. I sometimes replace it for feta. Or just leave mozzarella and capers out altogether. Reason being that this pasta is yummy in itself so sometimes less is more.

The smell that permeates your kitchen when you take the tomatoes out of the oven is intoxicating.

The recipe is from an issue of a magazine I subscribe called Delicious, issue Sept 2004. This food editor called Rose Lloyd wrote this gorgeous section about tomatoes, ‘Seeing Red’. All the recipes are pretty good but this one is the best in my opinion. You have all the juices of the tomatoes, combined with a few other ingredients to add a bit more flavour. It’s important that you respect the marinade time. Worst case scenario leave it for at least one hour so that the flavours can infuse. If you plan on making this dish for lunch just get the marinade ready first thing in the morning and get on with your own stuff. This is the longest bit of the recipe. The rest will be ready in no time.

Put the tomatoes in a bowl wit the chilli, garlic, oil and 1 tbsp of oregano. Season and mix together. Leave to marinade for 2-3 hours.

Pre-heat the oven to 200oC/fan oven 180oC/gas 6. Tip the contents of the bowl into a shallow ovenproof dish and cook in the oven for 20 minutes until tomatoes start to burst.

Meanwhile, cook the spaghetti in a large pan of boiling water until al dente. Drain and put in a large serving bowl, then toss in the remaining oregano, the capers and diced mozzarella or bocconcini.

Take the tomatoes out of the oven and tip the tomatoes and all their juices on to the spaghetti and toss to serve.

If you have some slices of bread have them ready as you might need to use them to mop up the juices.

Posted by Valentina at 4:56 PM

This is great you are offering the blog in english too! I'm looking forward to being able to read through your adventures!

How great to see you here. An honour indeed. I realized that since I live in the UK and have friends over there who does not speak my language it was just fair.Plus all the great people like yourself whose blogs I have been visiting.come back many times.